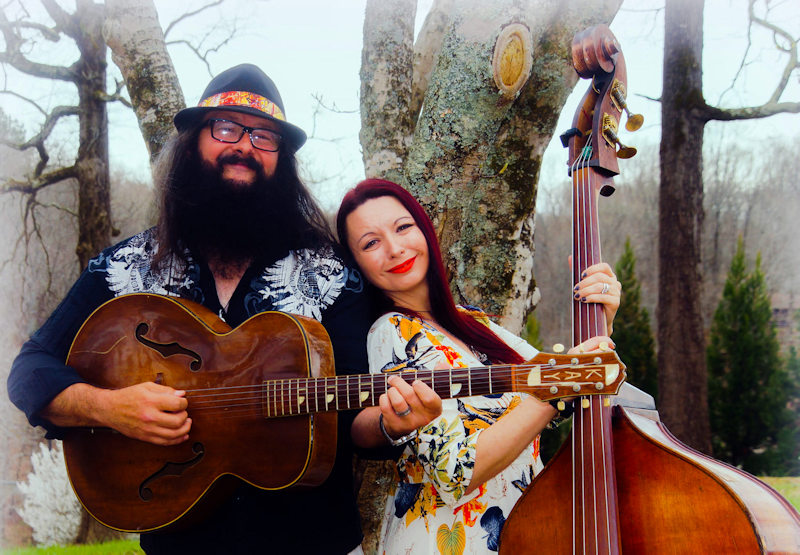 Curtis Jones reins as one of the most highly-respected flatpicking guitarist on the planet. Expanding on a legacy forged by musicians such as David Gilmour, Pat Metheny, Paco De Lucia, Doc Watson and Tony Rice,  Jones is often called by fans and critics alike, “The World’s Fastest and  Cleanest” acoustic guitarist. This is an extraordinary technique that he both teaches and brings to his contemporary guitar performances and productions.  However, speed is only a small part of what Curtis can do.  Through his pure guitar mastery, he has the ability to weave in and out of Jazz, Rock, Bluegrass, Flamenco, and World Music styles in a way that is more original than anything that has been heard since Django Reinhardt, while taking the listener to a world of complete beauty, passion, grace and fire.

Kim Jones is an artist, singer, and song-writer. Her vocal influences growing up were Wynonna Judd, Patty Loveless, Janice Joplin, Bobbie Gentry, Bonnie Raitt, and Stevie Nicks. Her Musical influences include Jaco Pastorious, Richard Wright, Bill Evans, John Coltrane, Thelonious Monk, and Mccoy Tyner. She plays upright Bass and sings with the Mountain Gypsy duo as well as occasional keyboard.  Kim also plays upright Bass and sings in Curtis’ full Bluegrass band, Primal Roots. She has been singing her whole life but has only in the last few years began to perform in front of live audiences. Kim plays and sings with strong emotion and delta blues style soul. When asked about her musical goals, her response is ” I just wanna share it! It’s in here deep down inside and I wanna let it out!”.

Come on out and join us for an evening of flatpicking and vocals!

Great music, food and drinks! What else can you ask for!

The event is finished.

Manage Cookie Consent
To provide the best experiences, we use technologies like cookies to store and/or access device information. Consenting to these technologies will allow us to process data such as browsing behavior or unique IDs on this site. Not consenting or withdrawing consent, may adversely affect certain features and functions.
Manage options Manage services Manage vendors Read more about these purposes
View preferences
{title} {title} {title}